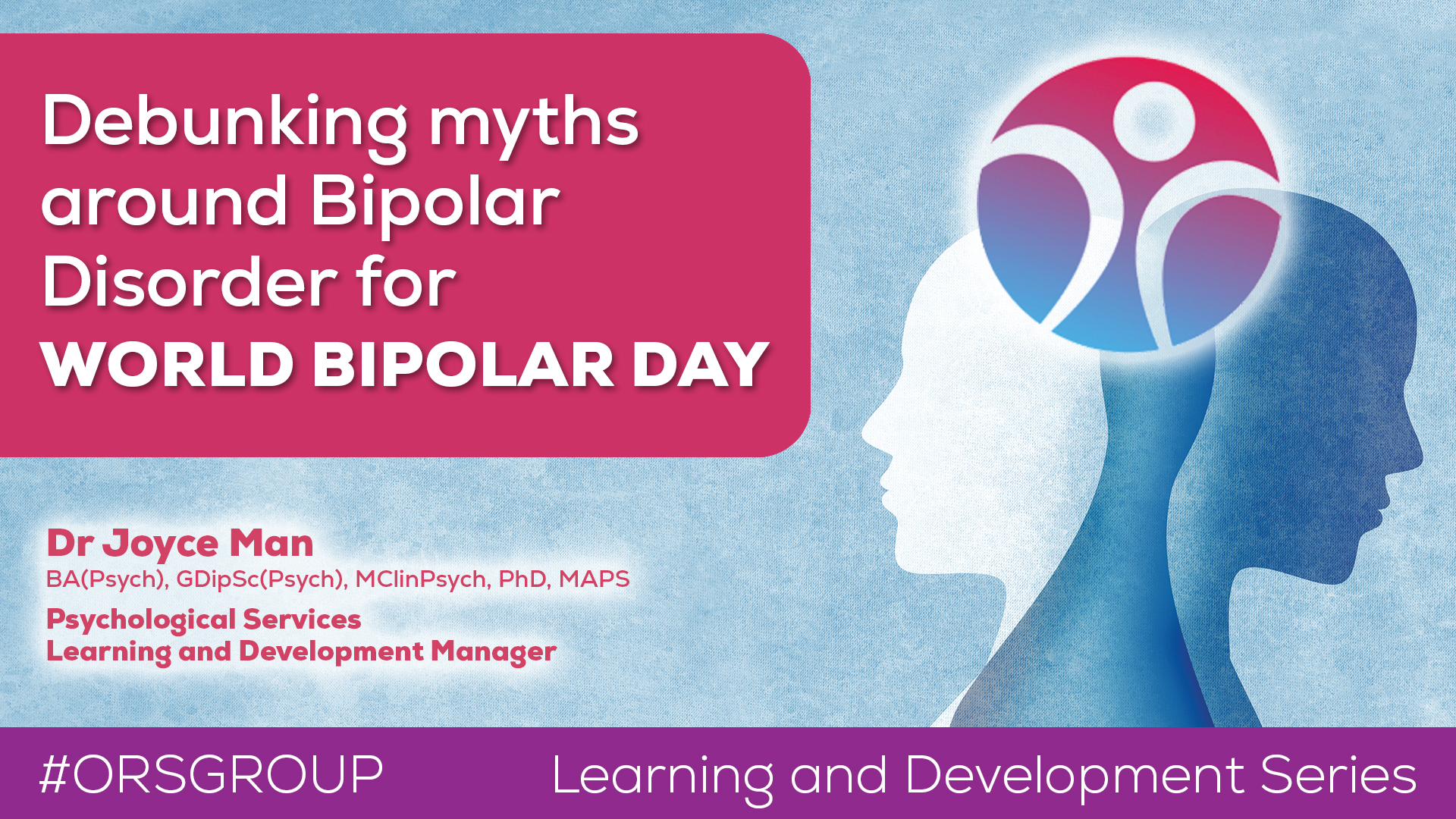 In Australia, bipolar disorder affects one in 50 people each year. This rate is higher than the rate of all forms of cancer combined which affect one in 250 people and depressive disorders which affect one in 20 people. The Diagnostic and Statistical Manual of Mental Disorders, Fifth Edition which is the standard manual for assessment and diagnosis of mental disorders classifies bipolar disorder into three main types.

I had the privilege of interviewing someone with lived experience- Jane (name has been changed), a 35 year old female working in the media industry. Together, we debunk some common myths around bipolar disorder.

Myth: People who have Bipolar disorder are just moody

Jane: Speaking from just my own life, I don’t think I’m a particularly moody person. I do feel my feelings very strongly, but this is pretty different to being moody. E.g. I don’t have bouts of extreme happiness, anger, sadness, etc. (unless there’s a really good reason).

Joyce: The best of us experience bouts of sadness, agitation and anxiety in response to environmental stressors.  However, the highs and lows experienced in bipolar disorder in comparison are much more extreme, debilitating and prolonged. For some individuals, short stays in hospital are needed.

Myth: People with bipolar disorder are manic all the time

Joyce: Mania and hypomanic states are often less common than depressive episodes.  An individual with bipolar, in particular, bipolar II are also likely to have periods where their everyday functioning is relatively unimpaired.

Jane: I have only been manic around the time of experiencing psychosis, which has happened very rarely.

Joyce: For some individuals, manic episodes can feel good in the short term.  However, if left untreated, the impulsive and reckless behaviours associated with mania can lead to detrimental consequences for the individual e.g. risky sexual encounters, excessive gambling, and excessive shopping. A manic person may have trouble maintaining control of their thoughts and actions and may even lose touch with reality.

Jane: Speaking from just my own experience, mania is scary. You do things and you don’t realise why you’re doing them, and in the past usually I’ve had no control over stopping my mania without intervention.

Myth: Artists with bipolar disorder will lose their creativity if they get treatment.

Jane: I am a really creative person. I can still do creative things, but I do wonder if my medications have changed my creative potential or the extent of my creative imagination.

Joyce: What is more likely is that untreated bipolar does more harm than good.  Seeking treatment (in most cases, a combination of psychotropic medication and evidence based psychotherapy) will enable individuals with bipolar to reach better mental clarity for creative pursuits.

What would you like people to know about those who have Bipolar Disorder?

Jane: I don’t feel like my bipolar is a hindrance, and I’m not embarrassed by it. I feel like it’s related to why I excel in creative pursuits, and why I can do creative things that other people often can’t. People shouldn’t be scared of people with bipolar disorder.  If the condition is controlled (and it is often easy to control even in severe cases from my experience), people with bipolar are the same as any other people you would come across in life.

Dr Joyce Man is a clinical psychologist and researcher with over 14 years of experience in the disability field. Joyce previously worked as a research associate at Autism Research Centre, Cambridge University where she co-facilitated a group of autism representatives across Europe to promote participatory research within AIMS-2-TRIALS. Joyce also conducted research around autism service pathways and best practice with the autism community across the EU. Preliminary findings have been used to inform the EU parliament with a view to improving service accessibility and standards for autism-specific and mainstream services for autistic people.
Joyce completed her PhD at Macquarie University where she investigated psychologists’ adherence to best practice standards when working with individuals with intellectual disabilities and co-occurring mental health conditions and the service experiences of carers. She is the recipient of the 2017 Australian Psychological Society, Psychology of Intellectual Disability and Autism Thesis Award.
Joyce has extensive clinical experience in government and non-government disability agencies in Australia, primarily with people with intellectual disabilities and autism. She is also the recipient of a number of industry awards including the FACS 2016 Excellence in Psychology Award in Evidence-Based Practice and The Benevolent Society 2017 Leaders Award.
Joyce is passionate about promoting evidence-based practice in the disability field and regularly contributes via lecturing, training, clinical supervision, reviewing papers submitted to journal publications and publishing peer-reviewed research.
A full list of Joyce’s publications can be found on Google Scholar.